Nie
Wine from under the volcano Sitno 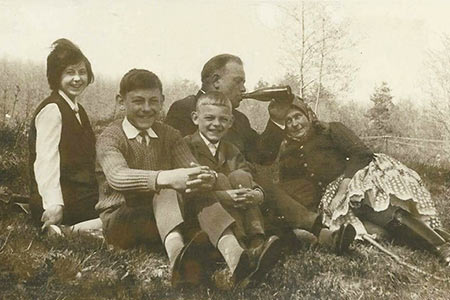 Our family has been strongly linked with Čajkov, the southern slopes of Štiavnické vrchy and, of course, with wine for several generations. We have always substantially affected the local wine-making and belonged to the biggest growers and makers of wine in Čajkov.

The seal by the Archbishop of Estergom from the year 1666, which entitled our family to trade in wine and agriculture products, is a symbol and a materialization of my ancestors‘ abilities and at the same time it is a challenge for me to stay true to their legacy. My grand-grandfather was the first one to send his sons to study viticulture and created a family tradition. I myself spent majority of my free time on the vineyard and in the wine cellar, which is why it felt natural to me to continue in the lineage in winery school in Modra and later on, on Mendel University in Brno.

I am thankful, that the long continuity of wine-making was never broken in my family and after finishing my studies, I had something to follow up.

Thank you, fathers and mothers, You are the vine, and I am the branch: He that abideth in you, and you in me, the same beareth much fruit: for apart from you ye can do nothing.

Wine of our grandparents 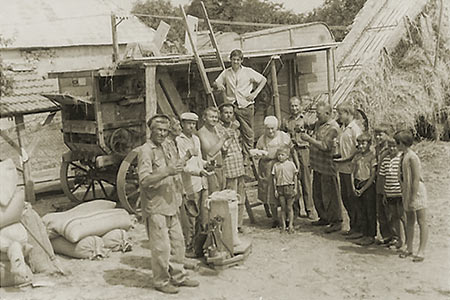 My view and understanding of wine represents a logical result of the life with Čajkov vineyards and wine. The fact that my life has been tied with wine ever since I was born means that I have always wanted to make my own, and, of course, best and top-quality wine. As the time passed by, I started to apply the knowledge gained in schools, I was looking for new modern production methods and applied new technologies springing up every day. I wanted to be better than those before me. I wanted to prove to myself and all those around me that new times have come and a new generation was going to take over the world of wine.

Now, with the benefit of hindsight, I look back and smile but I also perceive those times as irreplaceable experience thanks to which I understood how precious and unique Čajkov is, its terroir, traditional species, and the volcanic base that do not get enhanced but denied through application of artificial and forcible procedures.

The life of wine is not only about the past, it is also about the future and we should decide how to make use of the past to create future.

Today, I approach grapes and wine with respect and humility. This is the only way how a man may serve as a tool to improve and present wine. This became obvious to me for the first time in connection with Pesecká leánka the tender character of which gets slightly disturbed and uniform when applying, even if in a sensitive manner, selected yeast, enzymes or other additives. The only proper way is to respect the forces of nature and influences of a year, to understand the place of origin and discover what the nature has granted to us through wine.

I do not chase success, points or medals any more. I do not look for “the best” wine. Today, I know that the true gold is hidden in the character and individuality of our unique region and those specific features cannot be forcibly pressed into glasses. Those winemakers who are still after the “best quality” will find out with time that the term “quality” means the individuality associated with the character of their vineyard. 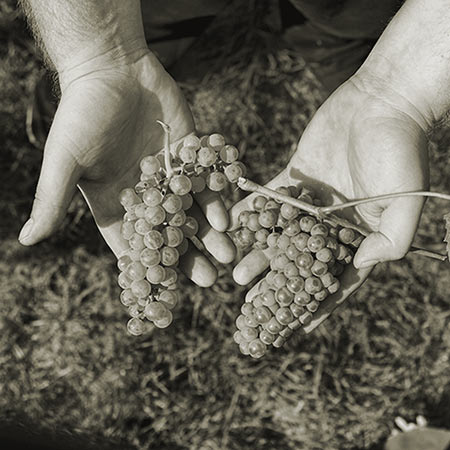 My special relationship with Pesecká leánka is not accidental. This wine used to be the most frequent one in our wine cellars but the culture and influence of the socialist system pushed this species to the position of some kind of a volume generator and it usually ended up compulsorily in wine factories.

At the beginning of the nineties, the perception of viniculture and winemaking was deformed to a great extent. We all started from zero and people were often not able to see what was so obvious: we had been taking Pesecká as a commonplace for a long time. Everyone had it, it produced a lot of grapes at stable levels and it maintained its quality even at a lower level of sugar content. Since a majority of consumers did not know it, it often ended up as before the velvet revolution.

I realized its unique and precious character for the first time during my studies at the Oenology Secondary School in Modra. When working in school and surrounding vineyards, I saw that Pesecká had almost disappeared. It was a shock for me. I came to the conclusion that it was a mistake to deem it to be a commonplace and routine. And then it started. I literally made Pesecká my guinea pig.

In the following years, I tried all possible and impossible combinations of production procedures from strictly reductive to oxidative along with a number of preparations, combinations of grapes from various vineyards, wine cuvées, and complicated cultivation of grapes affected by botrytis. It was a hectic period of time but thanks to it I understood that we can adjust neither the sort nor terroir. It is us who needs to adjust to them, overcome our pride, stop playing omniscient, and start respecting them. It is not an accident that Pesecka has been so frequent in Čajkov and neighbouring villages. Our parents and grandparents understood long time ago that this wine prospers here; the underlying rock and slopes suit it and it gives good yields even in worse years. And this is what terroir is about.

I have noticed that there are at last four clones of Pesecka only in our Čajkov vineyards and each of them has slightly different characteristics and wines made from them feature different characters and quality in various years. Its flesh is almost liquid with a minimum pectin content, its skin is very thin and fragile and thus it tends to break even upon very careful processing which often shows up as fine tannin in wine. But the fundamental factor is the coexistence with the tuff soil in Čajkov. Pesecka is luxuriant, easily reaches the deeper parts of the underlying rock, draws on its distinctive minerals and blends them into wine. It is able to make use of the ability of tuff to accumulate heat and use it to ripen.

Today, I take care to ensure that our leánka varieties mirror the environment, soil, region, and the sort itself. I am trying to achieve it through careful processing of grapes without pressing, any preparations or selected yeasts and especially through careful selection from the Čajkov areas that the most suitable for cultivation of Pesecká leánka.

“I am the true vine, and my Father is the husbandman. Every branch in me that beareth not fruit, he taketh it away: and every branch that beareth fruit, he cleanseth it, that it may bear more fruit.” — Jn 15, 1-27

One of the oldest regions in Čajkov, isolated by the Štiavnica forest, which creates perfect protection not only from gusty winds, but also from chemical interference in other vineyards in the region. We cultivate vineyards ecologically, manually, without a tractor and heavy machinery that could burden the land. While establishing the first vineyards, the remnants of the old protective mounds were found, according to which it was named in the typical Čajkov dialect. It is the highest location not only in Čajkov, but in the whole region, except for some of the Pukanske slopes, with an ideal south orientation and “long” sunshine. The reason why vineyards were planted here were repeated problems in the region with late spring frosts, often lasting for three consecutive years. The soil is a very light, tufted tuff that does not have the ability to keep rain water, and the vineyard has to form a massive root system that is capable of pumping not only the underwater but also the salt minerality of the volcanic ash - tuff.

Sádowie, once with a number of springs already recorded on the old military maps of the Habsburg monarchy, is the ideal compromise between accessibility and altitude. It is high enough to not suffer from spring frost, south oriented, with long sunshine, intense and windy air flow that prevents moisture and steam to create an ideal environment for diseases.

The vineyard is in a lower region on a trellis due to the possible risk of spring frost. Pragmatically oriented on the entrance to Čajkov vineyards with a vineyard house - a “chyška”, where grapes from other locations were processed as well. In addition to the predominant Pesecká leánka, there is also Bratislavská leánka and a number of unidentified forgotten varieties that are processed together with leánka.

Wine from under the volcano

Country of viniculture under the Sitno Volcano

Vineyards spread over the foothills of southern slopes of Štiavnické Hills and adjacent Ipeľ Hilly Area. Roots reach deep to the volcanic bed created by the mighty Sitno Volcano ages ago.

The Sitno stratovolcano was originally 4 kilometres high and covered around 2 200 square kilometres. Its dropped caldera accommodates an architectonic gem – the Town of Banská Štiavnica.

Vineyards under the Sitno Volcano spread mostly over tuffs and andesites. Simply said, soft tuff is volcanic ash and hard andesite is volcanic lava. Volcanic soil is porous and it perfectly absorbs water, gases, and oxygen that are subsequently available to grapevine roots penetrating the volcanic bed.

The development of the Sitno stratovolcano was complicated and it took place from the Baden period through the Sarmat period (approximately 5.0 up to 11.0 million years ago) in five major cycles. That period featured both calm and explosive intervals during which the volcano spouted various kinds of volcanic rock.

The Štiavnické Hills, a part of the sub-province of Inner Western Carpathians, are a range of volcanic mountains classified as neo-volcanic rocks containing andesites, rhyolites, breccia, and tuffs. This territory is extremely rich in minerals (approximately 140 mineral varieties) and precious metal ores that used to be intensively mined in the past.

The Ipeľ Hilly Area represents a geomorphological section of the Podunajská Hilly Area at the foothills of the Štiavnické Hills and it forms the northern foreland of the West Pannonia Basin. Some hilltops are 290 meters above the sea level. Its underlying rock contains volcanic sediments from the Štiavnické Hills and mineral waters spring through its breaks in villages Santovka, Slatina, and Dudince. The mineral water in Santovka has a composition similar to sea water with an increased level of Ca2+ and hydrogen sulphide.

Volcanic soil represents only 1% of the total surface of the Earth but those 124 million hectares ensure nutrition for 10% of the world´s population!

The historical town of Banská Štiavnica (situated in the caldera of the Sitno volcano) was entered into the List of World Cultural and Natural Heritage of UNESCO on 11 December 1993. The history of Banská Štiavnica has been closely tied with rich findings of precious metals, especially silver. The town´s area was inhabited by Celts already in the 3rd – 2nd century B.C. and its inhabitants mined gold from hard andesite. The first written mention of the town dates back to the year 1156 and it describes the town as “terra banensium” – the land of miners. In the 13th century, settlers from Tirol and Saxony arrived to Banská Štiavnica and the first written evidence of silver mining activities within the town´s territory dates back to 1217. In 1238, Banská Štiavnica was granted township privileges and the first document bearing the town seal dates back to 1275.

We are here for you

We will be pleased to hear from you. Share your experience with our wine with us because we want it to make you happy and delighted.

Produced and bottled by: